In northwestern Germany, surrounded by rolling hills that verge on the Weser Mountain Region to the south, there lies a town. It is one of several towns that straddle the River Weser as it flows toward the North Sea. The region was inhabited as long ago as the Stone Age, but it wasn’t until the middle of the ninth century AD when a Benedictine monastery was built on the banks of the river that a village began to develop. By the beginning of the 13th century, it was large enough to be considered a town, and because of an event that happened there later in the century the town is now famous. Today, there are picturesque sandstone and half-timbered houses, a collection of charming beer gardens and outdoor cafes, meandering biking trails, and almost 60,000 inhabitants. But, it’s the rats – or how they were removed – that are the town’s main attraction. The town is Hamelin.

According to legend, Hamelin was once plagued with an infestation of rats. It was 1284, and no matter how hard they tried, the townspeople could not get rid of them. Rats were everywhere. Just when they began to feel their efforts to rid the town of rats were futile, a stranger arrived giving them renewed hope. What a curious sight he was, dressed as an old woman in garments that were every colour of the rainbow.

“I can get rid of your rats” he announced to the townspeople. “What will you pay me?”

After lengthy consideration, the townspeople stated: “We will pay you 50 thousand gold coins if you succeed in ridding the town of rats.”

The stranger smiled, pulled a musical pipe from his pocket, and began to play. Rats began pouring out of every doorway and window in town when they heard the music. Before long a swarming mass of rats surrounded the stranger. When he was sure he had attracted them all, he lured every single one outside the town’s gate, playing his musical pipe all the while. He walked straight down to the river with the rats following close at his heels. When he entered the river, all the rats followed and were drowned.

When the Pied Piper returned to receive the 50 gold coins he was promised, the townspeople refused to pay him. For a moment he was silent, his furious gaze slowly moving over the anxious crowd. His eyes grew as dark as thunderclouds. When at last he spoke, each word was a thunderclap, “You will regret this! You will pay!” He then spun around and strode out through the gate.

Trembling and with the ominous warning still ringing in their ears, the hushed crowd moved as one to the gate to watch the receding figure until he disappeared over a distant hill. As weeks passed, the townspeople gradually began to relax. They hoped they had seen the last of the Pied Piper and that his threat of revenge was an empty one, but that was not to be.

In the summertime of that same year, the Pied Piper returned to Hamelin. This time he was disguised as a hunter wearing a tall red hat with a long feather at its peak. While the townspeople were in church he blew his musical pipe again. This time it was the children who were lured by the sound of his music. All except two of the town’s 130 children followed him through the town’s gate and down the road. 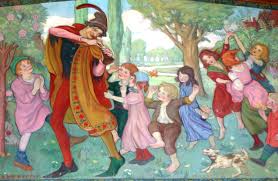 At this point, the legend becomes less clear. There are several versions describing the fate of the children. In the most macabre version, the children are lured to the river where they drown just as the rats did. In other versions, the children either disappear into a cave never to be seen again or else they reappear in Transylvania. One version ends on a more positive note with the Pied Piper returning the children to the townspeople after they pay him several times the original amount of gold agreed upon.

Many have studied the legend of the Pied Piper, trying to discover what tragic event actually happened in Hamelin in the year 1284. One thing is almost certain; there was no infestation of rats. They were not featured in the story until the 16th century. But what about the children? It is possible that they were killed by a crazed murderer or taken by an early form of the Black Death. The explanation most researchers favour is less horrible. The Pied Piper was probably a recruiter who promised freedom, opportunity, and land to the younger generation of Hamelin if they would migrate to Eastern Europe. It is known that by the 13th century, the area around Hamelin was over-populated, with the oldest sons inheriting all the land and power and leaving their younger siblings to suffer a life of serfdom. A brighter future was promised to the young people if they would migrate. They abandoned Hamelin to the older generation.

It is almost certain that the legend of the Pied Piper of Hamelin is where the phrase, “pay the piper” originated. The expression was first noted in the year 1638 and even today we hear, and hopefully heed, such warnings as: “Don’t stay up too late or you’ll pay the piper tomorrow!” or “No more chocolate for you or you’ll have to pay the piper.” In other words, just as the townspeople suffered the consequences of their actions, so too will we if we aren’t careful.

Sometimes a person is called a “pied piper” because she or he possesses the charisma, power, or influence to lead others to a goal or can manipulate them into certain ways of thinking or acting. It could be said that some rock stars, politicians, or even criminals possess such qualities. They seem able to capture others as if under a spell as did the legendary Pied Piper. The Pied Piper was both good and bad; he used his magical powers in a good way when he solved the town’s rat problem but in a bad way when he abducted all the children. Similarly, when we view someone as a “pied piper” we might see them as having characteristics that can be either positive or negative.

Today there are many representations of the legendary rats. They lead tourists on guided walking tours throughout the town’s small side streets and down to the riverbank. Every Sunday in the summertime the tale of the Pied Piper of Hamelin is enacted in the centre of town. The townspeople always promise to pay the piper, then suffer the consequences when they renege. One thing’s for sure, most will “pay the piper” one way or the other. Won’t we all?