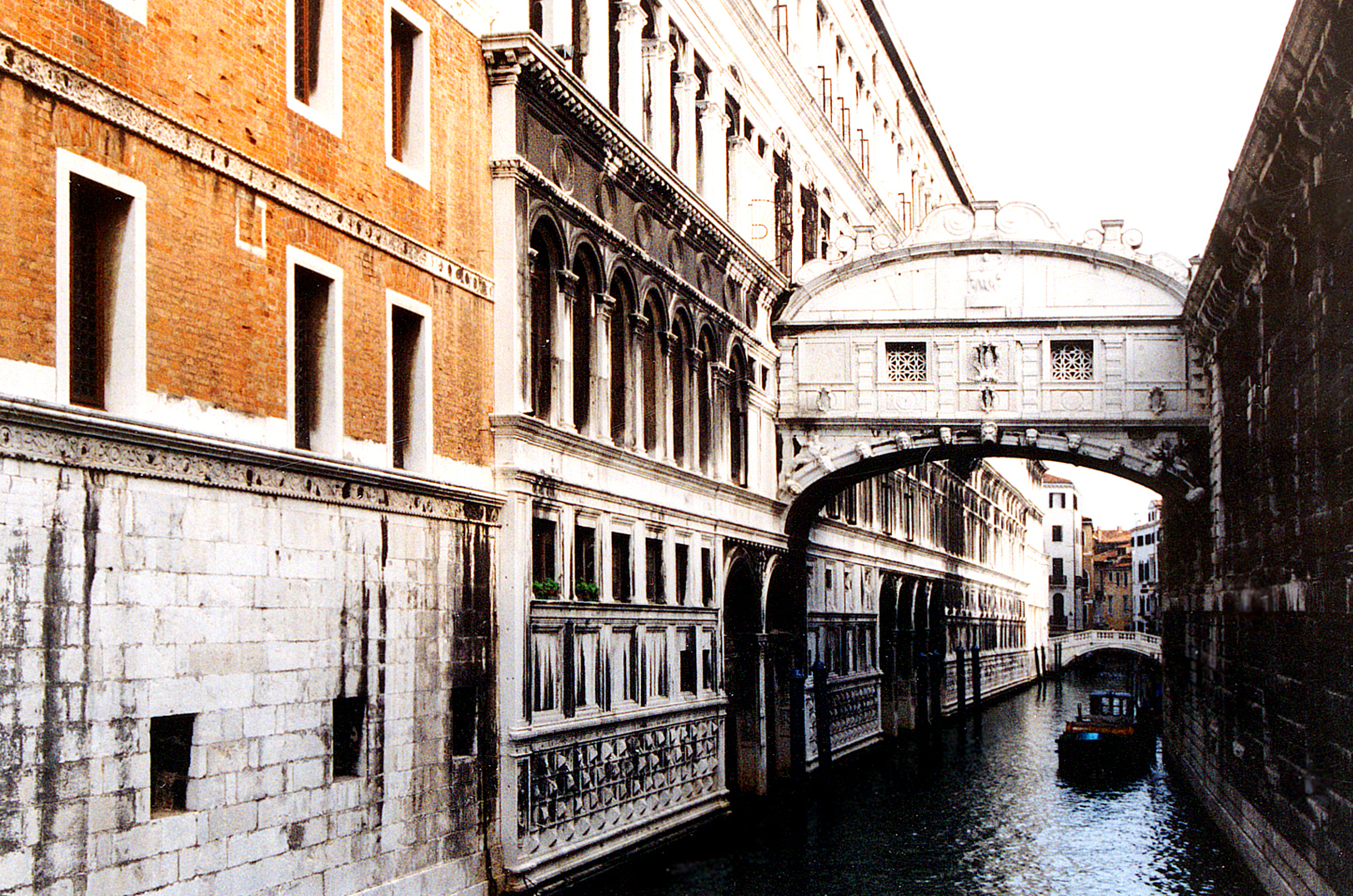 It was past midnight and no one was in sight. An unseen walker’s footsteps echoed off stone buildings. A burst of students’ voices, laughing and singing, faded away. Then, except for water gently slapping against wooden pilings, all was silent. We were lost and alone in the dark except for ghosts of Venetians who had lived and died here since it sprang from the lagoon 1500 years ago. It wouldn’t have surprised us to see a masked Venetian aristocrat in lace and powdered wig or Tintoretto or the Doge himself rounding the next dark corner. I wasn’t scared. I felt at home, as though I had lived here before. I would happily have curled up on a bench in the little piazza with my head on my backpack and slept like the dead. It was not to be.

After an hour of wandering, we found Locanda ca’ Foscari and easily roused Valter Scarpa who was expecting our arrival, though not quite this late. Locanda ca’ Foscari is an 11-room, family-run B&B, situated in a residential area near the university. Construction of the first floor was begun in the 17th century. Since then, an addition replaced some garden space and two more floors were added. The building was restored once when wind and tides caused damaging floods. Our little room was clean, quiet, and welcoming. We slept well in spite of the portrait of “The Eye of Conscience” that hung above our bed.

Venice beckoned, so we didn’t spend many of the remaining morning hours sleeping. We quickly made our way back to that bench in the little piazza, where the ghostly magic of the previous night was dispelled by store fronts now open and people going about their business. A tree sheltered us from a light drizzle that fell as we sat on our bench eating pizza and pannini, a supplement to the meager breakfast we had eaten earlier. We tossed crumbs to the cooing pigeons at our feet and planned the day: Piazza San Marco and Basilica, the Doge’s Palace, and the Bridge of Sighs.

A small bag of pigeon feed gained us instant popularity as we arrived at Piazza San Marco. Although I had seen photographs of  pigeons there scattering in excited flight around the heads of tourists, we resisted the urge to scare them and instead fed them quietly, enjoying their strutting as they crowded around our feet.

St. Mark, the patron saint of Venice, is represented by winged lions seen everywhere in Venice. Fourteen winged lions stand guard over Piazza San Marco, which was said to be “the most beautiful drawing room in Europe” by Napoleon. Imposing and distinctive at one end of the Piazza are St. Mark’s Basilica and the Camponile, or bell tower. The ornate church we see is not the original St. Mark’s Basilica. The original church was built in 832 AD to honour St. Mark’s remains which had been stolen from Alexandria. It was burnt down during a popular uprising and rebuilt in 978 AD. The Basilica we see today, with its onion-shaped domes, arches, dazzling gold, intricate mosaics, and multitude of pinnacles and statues, was not begun until 1063. It incorporated the original foundations and walls, is built in the shape of a Greek cross, and embodies a wonderful balance of Eastern and Western influences. It was finally consecrated in 1094 when St. Mark’s remains found their final resting place.

St. Mark’s Basilica is also home to the Horses of St. Mark, gilded bronze horses made perhaps as early as the 4th Century B.C. Whether of Greek or Roman origins remains debatable, but we do know where they have been. They were taken to Rome by Nero, to Constantinople by Constantine, to Venice by the crusaders, to Paris by Napoleon, then back to Venice when Napoleon met his Waterloo. Because of the damaging acidic air, the original bronze horses were moved inside. Now replicas majestically stand facing Piazza San Marco from the loggia over the central doorway.

Towering high above the Basilica is the Camponile. The original structure which occupied this spot stood for one thousand years before collapsing into a pile of bricks in 1902. So the tower we see today is relatively new. We rode the elevator to the top to get a bird’s eye view of old Venice with its terra cotta roofs, surrounding lagoons, islands, and causeway linking old Venice with the mainland.

Around the corner from Piazza San Marco and Basilica is the Doge’s Palace which housed the government of the rich and powerful Venetian Empire and the Doge himself, the supreme ruler. Although the palace was originally built in the 800s, most of what we see was built after 1300 as it was expanded to meet the needs of the Empire. Each Doge left his mark on history by building a new wing.

The largest and most opulent room in the palace is The Great Council. Portraits of 76 Doges line the hall in chronological order. The one at the far end that is blacked out is probably the most famous. He is Doge Falier who opposed the will of the Great Council, was found guilty of treason, and beheaded. Ironically, it is this notorious Doge Falier who is now the best remembered. This might prove the truth of what Shakespeare once observed: “The evil that men do live after them.”

Scattered throughout the Doge’s Palace are letterboxes, known as Lions’ Mouths. Anyone with a complaint or suspicion about anyone could accuse him anonymously by slipping a letter into the mouth, thereby setting the blades of justice in motion. After being tried, sentenced, and tortured in the “Room of

Torments,” the condemned would be marched through the Bridge of Sighs, where he would have one last look at his beloved Venice. On the other side of the canal, he would live out a hell on earth in the dark, damp cells of the prison. Many of the condemned left desperate messages carved into the prison walls.

While walking across the Bridge of Sighs from the courts to the dungeons with everything as it was hundreds of years ago I could easily imagine being a helpless victim of a savage justice. We could easily leave this terrible prison, but

so many
others ended their days here. How glad I was to come out of those narrow, dark tunnels and to feel the ocean breeze on my face again. I had gained new appreciation for being alive in the 20th Century when the scales of justice seem more evenly balanced.

Weary but contented after a long day immersed in Venetian art and history, we eventually found our way back to our bench in the piazza. We ate gelato out of little cups with tiny spoons and watched the blue sky darken. We were thinking about Venice. Built on a hundred and twenty little islands and laced together by four hundred bridges, two thousand alleyways, and what seems like even more dead-ends, Venice is unique and wonderful. I love her architecture, her fascinating history, as well as her elegant decay. I even love being lost in Venice and think of it as being an inevitable and perhaps essential part of a tourist’s experience. It seemed an eternity since we had arrived in Venice and become lost for the first time, but it had only been a day. I wondered what experiences tomorrow would bring.

Hi! I am Judy who lives in a community north of Victoria, B.C. in Western Canada. To celebrate my 70th birthday in the fall of 2015, my husband and I walked our first, most inspirational Camino. In the spring of 2019 we returned to Spain to walk again: Three Caminos in One.