We weren’t in a hurry to leave the La Quintana Albergue in Grado this morning, since it would be a short walking day with just 11.7 km to our destination – or so we thought!

We wanted to stay at the Shelter of the Monastery of San Salvador in Cornellana which I had heard was “fantastic.” It was founded in 1024 by Infanta Cristina. When she died, her descendants gave it to the monks of Cluny in 1122 so that they could establish a Benedictine monastery here. There is a sign on the old building about restoring it by 2024 when it will be 1,000 years old. It is definitely in need of a lot of work! The last renovation was done in 1607/8 as shown above the doorway.

We arrived at the monastery by noon and, since it wouldn’t open until 2 PM, we added our backpacks to those of two others who were waiting to check in and went for lunch. All four of us were back before 2 PM. There was a phone number on the iron gate to call if no one was there. It took a phone call and a code number to open the iron gate and let ourselves in.

Even before we got into the facility, Dave and I were having second thoughts about staying there. We had peeked through an open window into one of the dormitories and it looked gloomy and cold. Worse than that, my imagination started running wild. Maybe it was the bushes growing out of cracks in the stone walls, the black windows, or the black cat that was hanging around. I thought, “What a perfect setting for one of Edgar Allen Poe’s stories or for the wife of Mr. Rochester of Jane Eyre fame to come wandering down from the attic in her nightie at night with a flickering candle in hand.”

It didn’t seem very nice to leave the others on their own in what seemed to us like a creepy place, but another couple arrived who could give them moral support. We all had a good laugh over the situation we found ourselves in, then Dave and I left.

Salas was 12.5 km away and it was hard going although not nearly as hard as tomorrow will be coming out of Salas. We are glad we walked the extra 12.5 km today instead of tomorrow and then having to tackle the infamous killer hill on the same day!

We are at the Albergue La Campa in Salas and just finished a delicious vegetarian dinner shared with four others: Jack and Lucas from New Jersey, Marcus from Germany, and Pierre from France.

Walking the Camino Primitivo is a school project for Jack and Lucas with much of their research having to do with the history of the Camino. Because they are missing school, they are time-limited, but should have enough time to walk the Camino Primitivo and then to Finisterre and still submit their report to their teacher by the beginning of June.

The Albergue La Campa isn’t the best place in town, but we do have a private room with shared bathroom for 15 Euros each and the delicious meal was 12.50 Euros each. In this ancient building there is no heat, escape route, or smoke alarms in case of fire. We’ll go to sleep and hope Mrs. Rochester doesn’t come along with her flickering candle. 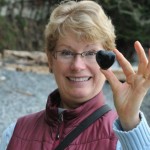