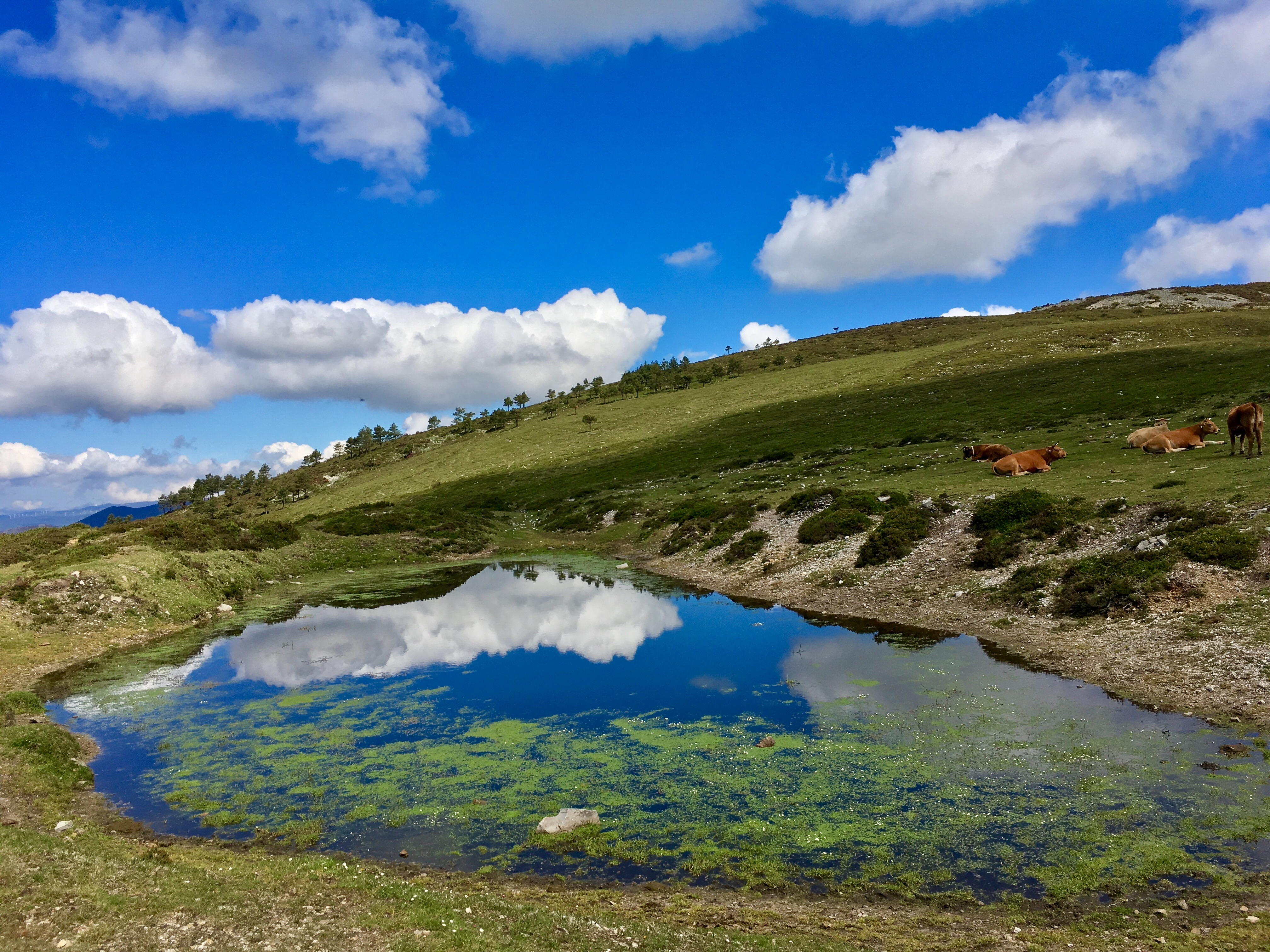 (It is finally time to catch up. We hope our blog followers don’t think we fell off the edge of the Earth! We are four days late posting anything because between Pola de Allande and A Fonsagrada the wi-fi was not strong enough to upload any maps or photos. Photos tell most of the story so we didn’t want to publish a post without them. We still can’t upload as many photos as we would like, but at least this is something.)

Today was such a pleasant surprise! We were afraid that our hike from Pola de Allande would be too difficult and considered taking a taxi part of the way to make it easier. What a mistake that would have been!

When we left the village, we expected the challenging climb to begin immediately but the ascent was gradual and pleasant. In fact, the first two hours turned out to be quite idyllic.

The trail followed a cascading creek up a narrow valley in dappled shade. Most of the time the trail was high above the creek, occasionally level with it, and sometimes small bridges would take us to the other side. Tributaries to the creek sometimes ran down the trail or crossed it, but never impeded our progress. It didn’t become mud like what we experienced before Tineo.

At one point where we crossed the creek, I dipped my water bottle in the refreshingly cold creek water. That’s when Tom, whom we met at the Albergue in Pola, caught up with us. Tom is a 72-year-old Sean Connery lookalike from Dublin.

After that pleasant two-hour hike, we crossed the AS-14 highway where finally the challenging climb began. The trail continued straight up the mountain for the better part of an hour until finally we reached the top (Puerto del Palo), where the Hospitales route reunites with the Pola route.

For a short distance we walked backward on the Hospitales route, visited with the horses and cows, and had a bite to eat. Then we were ready to tackle the steep downhill trail which cuts a straight line through the zigzagging highway leading to Montefurado (1.4 km). We then carried on to Lago (4.0 km) and finally to the little village of Berducedo (7.4 km).

We are staying the night at the Camino Primitivo Hostel in Berducedo in an 18-person dormitory for 12 Euros each. There is a lively bar/restaurant at the albergue where we saw two familiar faces that we last saw at the haunted monastery in Cornellana. We left them fending off the ghosts by themselves that night because we didn’t want to stay and, instead, continued walking to Salas. We are glad to know they are alive and well!

Poor Dave! When he went to shower tonight, he discovered he had left his towel at the Albergue in Pola de Allende. He went shopping for another towel but all he could find in that little village to serve the purpose were rolls of paper towels or a package of two Vileda Actifibre cloths. Dave bought the cloths and is pleased with how absorbent they are. When he wrings them out, they are perfectly dry again. The other positive feature is that they add no weight to his backpack.